After arriving on site and surveying the damage, the Target team provided immediate mitigation by boarding up exposed areas of the building and placing emergency temporary fencing around the affected area. Damaged roof trusses, decking, and exterior components were promptly removed and replaced. Target personnel coordinated with an engineer to draw building plans to satisfy City of Dallas code. Target also worked cooperatively with the City of Dallas for code upgrades, including electrical and plumbing. Once these measures were in place, each affected unit was demoed down to the framing and the framing was then cleaned and encapsulated. New electrical lines, HVAC units, air handlers, ductwork, and plumbing were installed throughout affected spaces. Each unit was then rebuilt from the framing out to include drywall, texture, paint, cabinetry, flooring, plumbing and electrical fixtures. 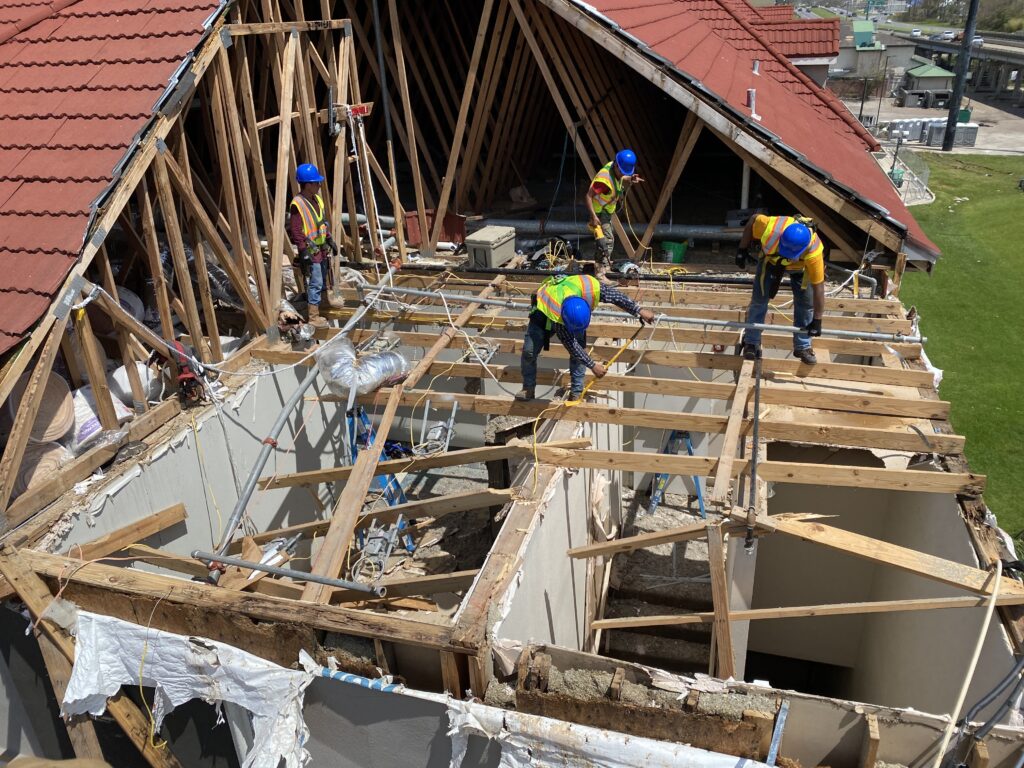 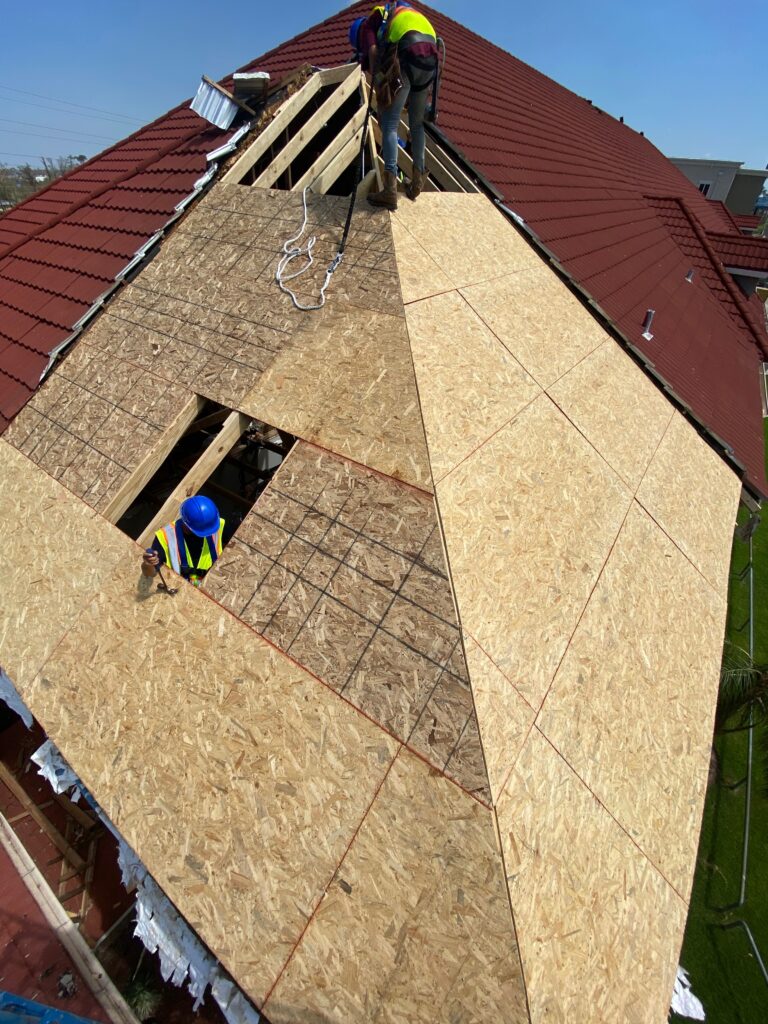 In late August of 2020 Hurricane Laura made landfall along the Gulf Coast. Two hotels on the Louisiana coast experienced significant damage to their roofing systems. Target Solutions was called in to mitigate the situation at each location.
The first hotel lost a tower standing 2 stories above the roofline and had large sections of its Decra Stone-Coated Steel roof system blown off. Target removed broken framing and structural components, then framed up the roof line and decked over it. The team installed Ice and Water Shield to protect the building and keep the roof dry until it could be replaced. The car port where the tower fell was also demoed as it was an extreme safety hazard.
The second hotel had a 13 ton AC unit that was blown off the curb and rolled across the roof, causing widespread damage to the SPF roof sytem. Five small split AC units were also blown off mounts, causing related damage. Target brought in a crane to remove the damaged units from the five story building. The team also installed a temporary 45mil TPO roof that was mechanically fastened to the deck. Target boarded up 25 windows that had been broken in the storm and patched over 100 holes in the EIFS siding created by flying debris.

In early August of 2017, a tropical depression moved across Mexico and developed into Hurricane Harvey. A large grocery store chain contacted Target requesting that we deploy equipment and personnel to begin shuttering stores in and around the Corpus Christi area. The Target team mobilized and sent out two 18 wheelers full of drying equipment, and 100 personnel over the next two days. The team worked along a huge span of the Texas coast from the store’s Kingsville location all the way up to Beaumont to shutter over 85 stores prior to Harvey’s landfall. Target continued to shutter stores after landfall as the storm made its way along the coast.

Once the storm events had concluded, Target was asked to assist two stores that had experienced major flooding damage in the Houston area. Both stores were holding over 5 feet of water and littered with large quantities of rotting food products. Target was tasked with removing and disposing of all of the product and mitigating the flooding to address the current situation and prevent additional water damage. The team provided water removal, dehumidification, cleaning, and sanitization services. Mold issues were mild, but some mold removal was also required. The stores were serviced for approximately 5 weeks before work was complete. Additional stores that did not experience flooding required other services, including restoration from wind damage and minor water intrusion. In all, approximately 20-25 stores were serviced with mitigation efforts. All 85 stores that were shuttered were serviced by Target for the shutter removal process. Auxiliary items such as cart corrals, awnings, and other items that were taken down prior to the storm were replaced as they were initially found.

A fire event resulting from a nitrogen bottle falling into molten metal at a factory in Troy, Texas caused extensive damage to nearly half of the 142,000 square-foot manufacturing building. The estimated damage was $5 million. Target was contacted to assess the damage and begin necessary repairs. Salvageable contents were removed, including equipment and product, some weighing up to 10,000 lbs. Target relocated maintenance operations to limit business interruption. This involved setting up temporary locker rooms, break rooms, and restrooms at the secondary site.

Once immediate needs had been met, repairs began. First, debris was removed and the compromised structure was demoed. A retaining wall was built to prevent flooding during the rebuild process. All essential systems were repaired, including water, electrical, lubricant lines, air lines, and pneumatics. These repairs enabled 15 production stations to resume operation 18 hours ahead of the proposed deadline. Target’s efforts allowed the business to resume production quickly, limiting loss of income and overall damages substantially. The Target team worked around more than 50 employees to ensure the continuation of business.